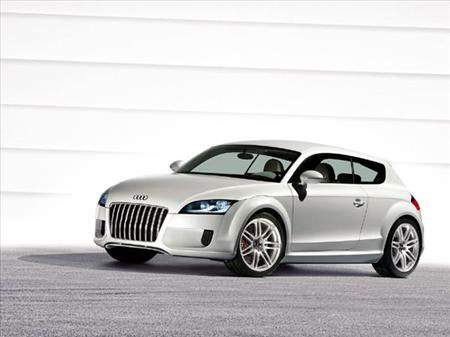 We haven’t seen the Audi A2 here in North America yet, and it hasn’t been doing particularly well over in Europe either, but the German automaker is taking a new approach when the new generation of A2 hits the market in 2008. They’re targeting the long-roof hatchback squarely against the BMW-owned Mini brand.

This “shooting brake” concept looks bigger than the Mini, with a longer, more conventional hood and body. Some may say it looks like a mini Nissan Murano. The new Audi A2 has fairly aggressive styling, as well as the company’s now trademark large trapezoidal grill. Although based on the front wheel drive Volkswagen Polo platform, this vehicle will likely be offered with the signature Quattro all-wheel-drive in place.

They haven’t offered any details as to what is going to be found under the bonnet (er, roof), or what kind of price point they plan on setting, but based on styling alone, Mini had better get its act together because they’re going to have some serious competition when the new Audi A2 shows up in showrooms come 2008.