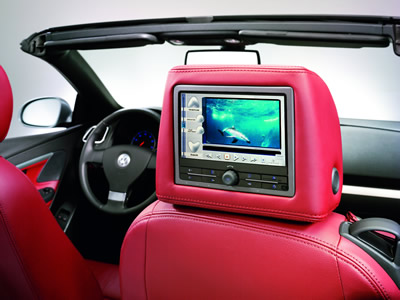 We have seen computers designed for cars before and we’ve seen cars with integrated computers before, but now we have two heavyweights in their own industry coming together for the benefit of consumers. Volkswagen and Microsoft have teamed up to create a new car, the Volkswagen Eos, which is being shown off at CeBIT. The back of each seat rest has a 650 MHz processor in it which powers a 7 inch touchscreen for back seat passengers and a 20GB hard drive for data storage. A wireless LAN has multiple uses, including connecting an external keyboard or a games console.

Since it’s in a car, it will obviously be capable of navigation. You’ll also be able to entertain yourself however you want – videos, music, video games. The advantage of the computers over a normal entertainment system that can do all that, though, is that it also lets you venture online. You can surf, message, e-mail and the works.

The Eos will be available in the summer and is expected to come in around $31,000.