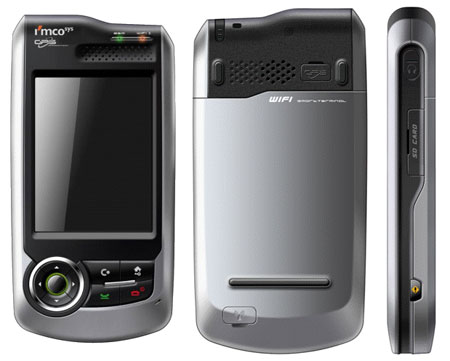 As if you haven’t already heard of every possible feature you can find on a PDA phone already, ImCoSys of Switzerland is set to release a smartphone that runs on Linux (hurray!) and features Skinplex NFC. Now, I’m not entirely clear on what that is, but according to the press release, with Skinplex NFC, you gain “access control, security monitoring, and authentication” whereby “the phone senses the person’s presence.”

I’m not sure if I’m supposed to be excited or scared when I hear statements like that, but it is certainly innovative to say the least. Among the other features on the ImCoSys Smartphone are a GPS receiver (with included GPS software on SD card), Bluetooth connectivity, WLAN (802.11b), and a 240 x 320 pixel 262k touchscreen.

The processor comes from Texas Instruments, an OMAP-730 running at 200MHz. If the 64 MB of on-board memory doesn’t suffice, you can always expand via the SD expansion slot. Unfortunately, this quad-band GSM smartphone lacks a camera “so that it may be used inside companies that prohibit camera use.” Whatever.