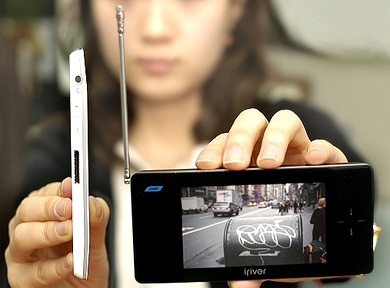 The world of personal media players has always been an incredibly competitive one. We’ve seen great offerings from companies like Cowon and others, as well as the popular iPod Video, especially considering that Apple is said to be working on the next generation of the movie player and that it will have touchscreen capabilities. Not to be outdone, iRiver too has been an industry leader in portable music and video, and with their latest, the V10 spied at CeBIT, the company should be in good hands.

They’ve managed to keep this device thin, at a mere 10.3 mm of thickness, but that does not mean that the iRiver V10 is starving for features. Quite the contrary, actually, because it has a 3-inch 480 x 272, 260k color display, and it might even run on Windows CE 5.0. It’ll sport a DMB-receiver for all your mobile TV needs, as well as an adequate though not huge 4GB of storage space.

This image is slightly different than images people spied a couple months back, because this one doesn’t seem to have slide-out controls for a PSP-killing gaming experience. This could mean one of two things: either this is a different device altogether, or simply an updated version of the same gadget. More as it develops.