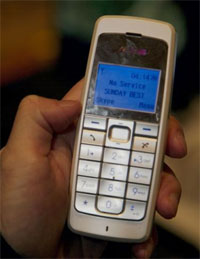 Their phone might not be much of a looker, but the Wi-Fi Skype handset shown by Asus at CeBIT has a handful of features that other similar units in the marketplace don’t have. It was first seen at CES earlier this year, now again at CEBit, hopefully Asus will quit teasing us with the handset and get it out on the market.

You’ll get the standard 802.11g WLAN connectivity, so you can get your VoIP on pretty much anywhere you have access to a Wi-Fi hotspot. More and more cities are starting to adopt municipality-wide Wi-Fi, so it’s only a matter of time before these Skype phones start to replace a cell phone or two.

The 128×64 blue-lit display is simple, but effective. By not opting for a full color screen, Asustek probably added fairly significant battery life to this handset. Charge it up via a USB connection and you’ll get 2 hours of talk time and up to 25 hours of standby.

Oh, and those extra features I was talking about? It can act as a wireless remote for your PC, being able to control playback of whatever you have going on Windows Media Player. They say it can act as a “mini audio system” itself, as well. Other than that, not much else is known about Asustek’s Wi-Fi Skype handset, including information about pricing and launch dates.