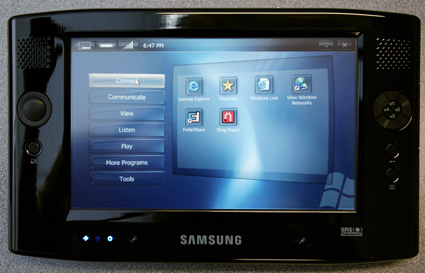 First we thought that Origami referred to a particular hardware project by Microsoft, and then we wondered if it was rather a specific operating system. Well, according to the guy heading the Origami project, Otto Berkes, the term “Origami” doesn’t refer to a specific device or hardware specification. Origami is any ultramobile PC running on Windows Tablet (or Vista) and enhanced Microsoft Touch Pack.

There was a sneak peek at the Origami User Interface earlier today, but now a few more details have been released about “Touch Pack”. It is not simply an interface, but is rather a suite of applications and utilities, including the on-screen thumb-based keyboard (which is now known as “Dial Keys”, because it seems the “keyboards” can change to other buttons as well). The meat and potatoes of Touch Pack is a launcher application that groups and opens programs based on touch. Touch Improvements is designed to optimize the Windows environment.

Origami is being targeted at the average consumer, rather than the mobile professional, with product designs already coming out from Samsung, Asus, and Founder.