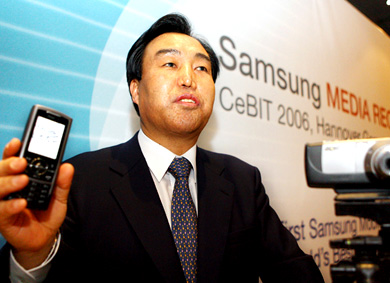 It’s gotten to the point where we – or rather, Korea – are starting to see cellular phones that have integrated cameras in them that are just as, if not more powerful than similarly-priced standalone shooters. Case in point is the latest from Samsung, the SCH-B600, which can be more accurately described as a 10-megapixel camera with phone functionality, rather than a “cameraphone”.

Unveiled at this year’s CeBIT show in Hanover, Germany, the SGH-B600 not only sports the hugely impressive 10-megapixel shooter, but that camera is also capable of 3x optical and 5x digital zoom, as well as focus adjustment and exposure compensation.

The goodies don’t even stop there. The 2.2-inch QVGA display may not wet your pants, but when you throw in Bluetooth connectivity, a DMB digital TV receiver, video and music playback capabilities, dual speakers and a microMMC expansion slot, you might be getting close to needing a new pair of underwear.

SK Telecom in Korea will start carrying the Samsung SCH-B600 sometime in the second quarter, with likely no North American launch in sight.