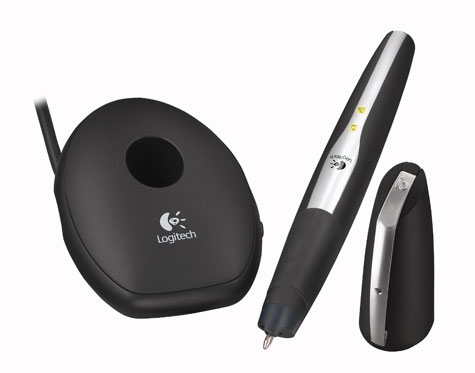 The new digital pen is equipped with the Logitech io Tags feature, which enables it to improve a user’s efficiency by enabling them to send snap shots of their handwritten notes to their calendar and email programs. The improvement to this feature is that now, Logitech io Tags is linked directly to MS Word. If you dock the digital pen, a split-screen interface will appear showing you both your chosen handwritten note and its converted text versions. You can then simply insert the text into a new MS Word document or edit it first. No worries too about lost original handwritten notes as they are auto-saved when you dock the io2 pen.

During set-up, its updated software conducts a search of your MS Outlook and Lotus Notes contacts and adds it to its Logitech io2 dictionary. The result? If it encounters the name, the pen will convert it from ink notes to digital text. Logitech’s digital pen will also be prompting users to add more words to the dictionary on an on-going basis.

Logitech’s io2 Digital Pen is expected to be released at the end of March and will be available for US $149.99.