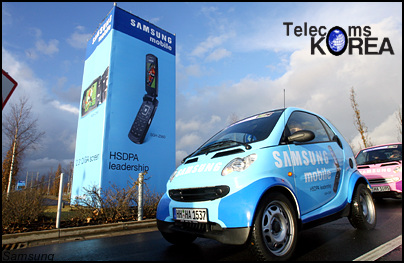 It might seem like a little bit of bias when Telecoms Korea reports that Korean companies are “overwhelming” CeBIT 2006, but in actuality, it isn’t that far away from the truth. Sure, a whole lot of media attention has been given to Microsoft’s Origami project, but if you start to look at the cellular phone side of things, specifically, you will be surrounded by cutting-edge handsets coming out of Seoul and surrounding areas.

To get to Hanover, you’ll likely have to fly to Frankfurt Airport, and what’s one of the first thing’s you’ll see as you get off the plane? 180 LG 40-inch PDP televisions, covering every corner of the airport. The electronics maker is hoping this will be a worthy PR endeavour, helping to improve its brand recognition. That’s not to say their cell phones don’t speak for themselves; after all, who wouldn’t want the ultra-slim 5 megapixel KG920, or the DMB-ready V9000?

Not to be outdone, Samsung Electronics has launched 20 Smart Cars around the exhibition center in Hanover, all displaying advertisements for the company’s HSDPA and mobile TV phones. That’ll help prepare the public when they show off their 8GB HDD handset as well.

Pantech has over 40 handsets at the show as well, including 2 UMTS units. You’ll find EDGE, EV-DO, multimedia playback, biometrics, and multi-megapixel cameras on a number of these phones.