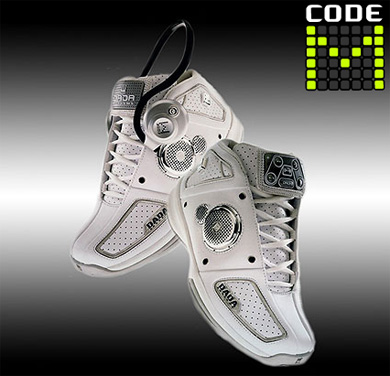 These sneakers give the term “kicks” a whole new meaning, eh? Dada is set to launch a set of running shoes with built-in MP3 players in them, called “Code M”. Of course, it wouldn’t be practical to have an extra long headphone cord running from your feet up to your head, so they have decided to integrate a wireless music system in these shoes, so that you can receive the tunes on your wireless headset.

However, if you want to change tracks or anything like that, you’d have to reach down to the controls located on the tongue of the shoe. Not exactly practical. To load up songs onto your “kicks”, you simply attach it to your computer via USB, because yes, we all want that rancid gym sock smell right near our computers. Battery life is abysmal at a mere six hours of play per charge, and storage capacity isn’t exactly that hot either, with a reported capacity to store “up to 100 songs”. So, I’m guessing either 256MB or 512MB, depending on whether it supports WMA or other formats, or not.

No word on availability, but if you’re willing to drop two Benjamins (the starting price is $199.99) on these for a little uniqueness, all the power to you.