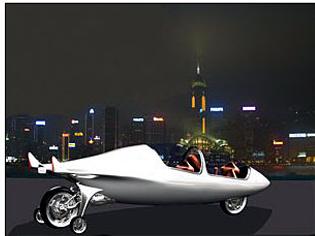 Having four wheels can really slow you down. Why would you want a MacLaren F1 when you can go two-wheeling with the Acabion GTBO 70, a “jet fighter canopy on wheels” capable of going 375mph thanks to its absolutely obscene 690 horses. I guess you could technically say it has four wheels, because it has a couple of training wheel-like things in the back for stabilization at a walking pace, but as soon as you get going, the stabilizers lift up and fold out of the way.

It is simply incredible that they were able to milk that much power out of a turbocharged 1.3-litre Suzuki motorcycle engine. In fact, the GTBO 70 can go from zero to 280mph in just 19 seconds. It’s actually somewhat practical as well, because fuel economy sits at 70.5mpg, and you even have 150 litres of trunk space at your disposal. They’ve kept the weight down as well, with the GTBO 70 tipping the scales at a mere 359 kg. Imagine getting to work in just 3.4 minutes? Only if we had runways.

If you’re intimidated, you should be. A lesser Acabion is also available, with a mere 355hp and a max speed of only 344 mph.

No word on pricing for either vehicle, but it seems the German firm is already taking orders for a yet to be determined launch (no pun intended) date.