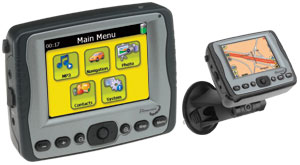 Directed Electronics has just announced its entry into the portable navigation system industry by launching the NAV350.

The NAV350 features controls and functions that are very easy to use and understand. Searching for a particular destination or checking for directions is as simple as using store-locators in shopping malls. In fact, it even has the same feel and function as the NAV350 features a 3.5-inch color touch screen.

Whether you’re in a cross-county or inter-state trip, getting around the United States would be an effortless endeavor. There’s no need to open large maps that could sometimes act as a windshield cover. The NAV350’s SD Storage Card contains a complete map of the country.

Asking or checking for directions is as simple as typing the place of your destination in the unit. If you have problems shifting glances, the NAV350 would still be able to help you since it could deliver audible prompts, and in 11 languages at that. You could also specify up to 1.5 million ‘points of interest’. The unit will alert you every time you’re near or are already in the indicated places.

The NAV350 is available at authorized Directed Electronics stores and sells for US $799.99.