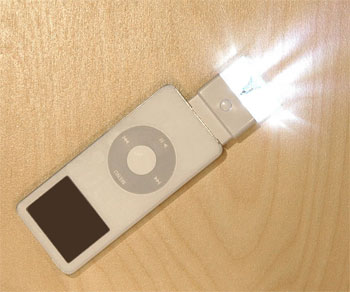 Intuitive Devices has just released a one-of-a-kind accessory for the Apple iPod. Blinkit is a light-emitting attachment that can be conveniently connected to your Apple iPod connector.

While it may seem that the blinking lights serve no purpose other than to provide you with visual entertainment, Intuitive actually had the user’s safety and convenience in mind when it made and designed the product. It’s a good signaling device as its beam can easily be seen even from a couple of hundred yards away.

Slipping through spilled soda or popcorns in a dark movie theater may become a thing of the past… or at least until Blinkit’s battery runs out, as the unit functions excellently as a flashlight. Battery burn out may take a while though, as the device’s dual LED beam requires minimal energy.

Of course, nobody’s preventing you to have fun with the accessory. You could change the color of the unit’s light by simply choosing any of the 5 lens caps available for it. You could also change the path of the beam. Depending on how you adjust the device’s mirror system, you could point the light forward or divide it and direct it to both sides.

Apple stores are now offering the device for $29.95.