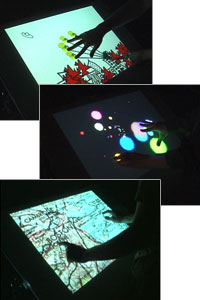 You’ll find touchscreen functionality pretty well anywhere these days, from Microsoft’s Origami project to your old school Palm Pilot, but we have yet to see any interfaces that take multiple touches at the same time. “Multi-touch sensing” not only allows users to interact with more than one finger (or stylus) at a time, but can allow for multiple users at the same time.

The technology is being researched at a New York University, slowly but surely getting us closer to living the life of Tom Cruise in Minority Report.

Not only are they working on “multi-touch”, but they also have developed it in such a way that it is also pressure sensitive. The demo unit is a 36×27-inch rear-projection display, measuring the perception of pressure using something called Frustrated Total Internal Reflection (FTIR).

Presenter Jeff Han at the ETech Conference sees that this “is a rich area for research, and we are extremely excited by its potential… It’s also just so much fun!”