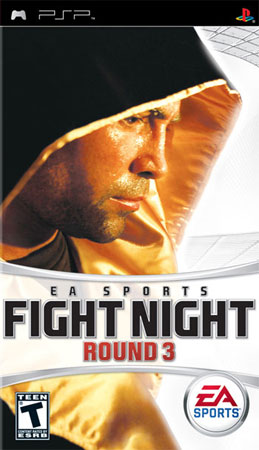 Not since the NES and SNES have boxing fans had so much fun playing video games. With Rocky Legends that was released last year, and the popular Fight Night series going hi-def on the Xbox 360, fans are in squared-circle euphoria. And to top it off, EA Sports just recently released Fight Night Round 3 for the PSP – now you can take your boxing action with you on the go!

Round 3 isn’t just another one of the run-of-the-mill PS2 ports for the PSP. EA Sports decided to up the ante a little bit by combining the best of the PS2’s Round 2, and Round 3 games into this version for the powerful little handheld. They also added in some new options to keep the game fresh and give some variety to the regular career modes.

The new modes reward you with medals and cash that you can use in your regular career mode which makes them all the more enticing. One of the new modes is called Rival Challenges, which is similar to the ESPN Classic fights on the PS2 version of Round 3. It allows you to jump in at a critical moment in some of the most classic and renowned bouts ever fought, and you then attempt to change the outcome. Another mode is called My History. This time you’re thrown into the ring against an opponent and you try to overcome his unique style and prevent him from doing certain signature moves, like taunting, or throwing a flurry of punches at you.

Besides the regular modes and the new modes that EA added, they also offer you the ability to go for some multiplayer action with adhoc and infrastructure modes available. Since this is an EA game, to go online you’ll have to pony up the $2 or sign up for some emails. That is still sort of a hassle, because either you don’t want to spend the little bit of money, or you have to go through the trouble of configuring a spam filter on your email afterwards. But for the most part, it’s not that big of a hurdle, and it grants you the ability to get in on the multiplayer action and gives you access to some boards full of stats, which is always fun.

All in all, it looks like we have a winner on our hands here with the Round 3 on the PSP – but then you get to the negatives of this game. First off, the controls, which were so praised upon in the PS2 version are gone. They had to be, because the PS2 has dual-analogue controllers and the PSP does not. Instead you’re left to contend with a confusing number of button combinations that you must perform in order to throw the punches you want. The problem being is that unless you just want to throw a hook or a jab, you’ve got many more punches than buttons available. Secondly the defensive moves require just as many combinations. Before long you can feel overwhelmed at the finger-cramping moves you must pull off on the not-always-that-comfortable-to-hold PSP.

Next on the list of grievances is the online play I previously mentioned. It’s fun! That is if you can happen to stay in a fight long enough to complete it. During my playing I dropped frequently from matches, and ones that I didn’t drop from I lagged. Before coming into this review and just trashing the online component I did some research, asked some other people how their experience was, and guess what… it was the same. So basically $2 to play bad online = boo! 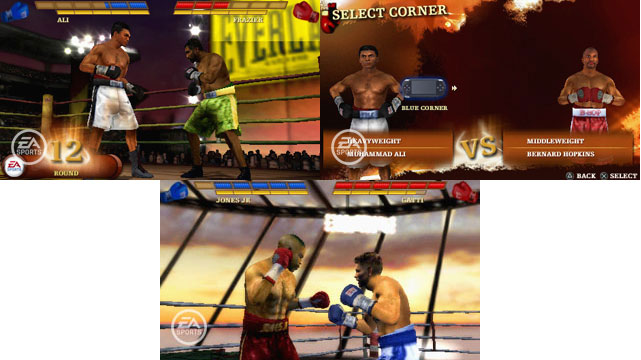 Finally, as a gamer for many years, I’ve had to go through the progression of cartridges to disks, and with it and increase in the dreaded load-times. PSP games are notoriously slow in loading, but some are worse than others. This game my friends is one of those “worse than” games. It’s not quite to the level of Smackdown vs. Raw 2006, but it’s bad enough.

Basically if you’re a big fan of the Fight Night series, you’ll probably like this game for the added modes of play that keep it pretty fresh, and not just another port. But first you’ll have to get used to the new control method. For new comers to the series I wholeheartedly suggest you try the PS2 or Xbox versions first, as that is how these games are supposed to play, and you won’t immediately leave the series with a bad taste in your mouth.