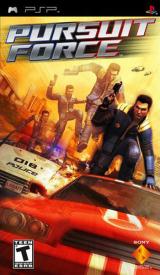 Every good action movie requires a high speed car chase, and the flick is even better if the star jumps between moving vehicles wielding an assortment of weaponry. That’s the thinking behind Pursuit Force for the PSP, which hits stores this week. This “Hollywood-style crime fighting title” from Bigbig Studios is huge on action and speeding vehicles. There are 50 different cars involved in this game, in addition to a choice of ten weapons.

Taking on the persona of a Capital City officer, you hunt down the bad guys and bring them to justice. While not in a car, you chase after the criminals on foot, or even pursue them through air and water. The excitement factor is incredible in this high-octane thriller, especially when you get to jump between vehicles traveling at over 100 miles per hour, latching onto foes and beating the snot out of them.

Pursuit Force is rated T for Teen, containing suggestive language and themes, as well as, of course, violence.