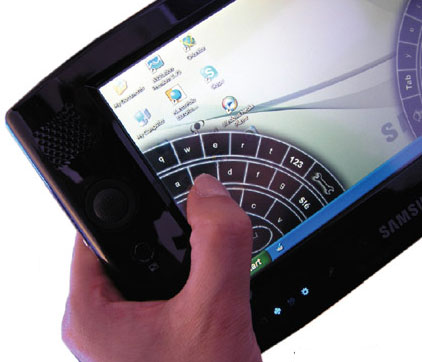 If you thought news about Microsoft’s Origami project was over and done with when we revealed that it was simply a 7-inch tablet PC-like device, you clearly have not been following the world of technology long enough.

The news never stops coming, and here is yet another important detail about the gadget being made by Samsung: the Origami user interface features an on-screen virtual keyboard with a quarter-circle on each lower corner, designed for thumb input. This user interface has been dubbed the Origami Touch Pack Interface, and it seems like that name is going to stick.

In related CeBIT news, there will likely be a number of external peripherals for the Origami-powered Samsung Q1. Look for a GPS unit, Bluetooth keyboard (to avoid those nasty thumbprints that’ll result from the Touch Pack Interface), a DVD drive, and a DMB TV tuner, the last of which will be an internal feature for Korean units.