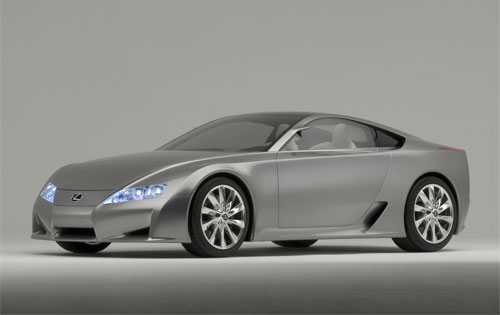 They’re being quiet about it for now, but Toyota executives have approved the start of production of the LF-A, a supercar with more than a little inspiration drawn from Formula 1. For now, the car has a 5.0L V10 to get it rolling off the line, but F1 has shifted to a V8, so the car might follow suit before it hits production in 2008. On the other hand, heated rival Honda is prepping a V10 NSX for 2009, so Toyota might not want to take a step back in power. The LF-A will cost you $170,000, which could frankly be a lot worse.

There’s some good competition going on behind the scenes of this car, too. For now the Japanese Grand Prix is held at Suzuka, which Honda owns. The contract is up for renewal with F1 this year and Toyota is lobbying to bring the race to their Fuji Speedway. Obviously, the F1 race would be huge for Toyota as they get ready to promote a car full of F1 technology.