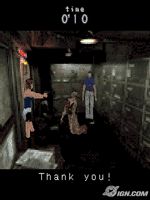 Resident Evil is a huge franchise, not only spawning numerous video games, but invading the silver screen with a pair of movies. Now it seems like Capcom is taking it to yet another venue: your cell phone. Resident Evil: The Missions obviously doesn’t carry the same graphical prowess that you would find on a home gaming console, but Capcom aimed to bring the survival-horror experience to the smallest screen they’ve tackled yet, and based on an IGN.com review, were successful in doing so.

Unlike the home game where the missions are much longer and you’re required to do some intense exploration, the mobile version breaks up the action into 100 bite-sized pieces, designed to last no more than a few minutes each. This fits well with the cell phone platform, because, well, who plays mobile phone games for hours on end?

You start out as Jill Valentine in – you guessed it – a run-down mansion taken over by the Umbrella Corporation, although there are other characters to be unlocked along the way.

Best of all, unlike so many other cell phone games out there, Resident Evil: The Missions does NOT opt for a top-down perspective, rather maintaining the game’s usual fixed-camera 3rd-person view. IGN.com scored it an 8.5.