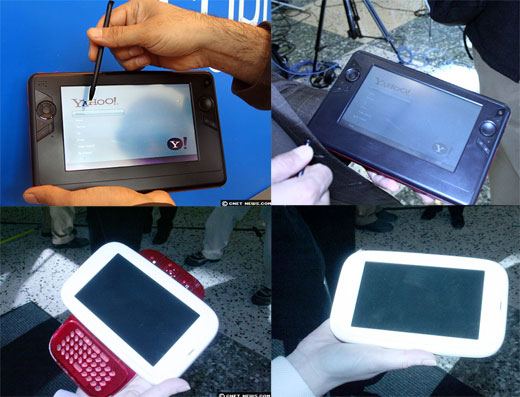 It turns out that Origami is an ultramobile PC running Windows Tablet, or ‘minitablet’. There were two models being demonstrated: a black one with a 7-inch touchscreen display, and the other, a white and red unit with a swivelling top to reveal a QWERTY thumb board. Not much different then what Sharp has going on with their Linux-based Zaurus SL-C3200, except the Zaurus sports a thumbboard.

Word is that Origami will run on a “variant” of Windows XP, though it should be capable of running any x86-compatible operating system. Based on the size, this should fit right in between what you’d expect from a Pocket PC and a full-on notebook computer, though we’re not really sure how much functionality this thing will be able to handle. To keep battery life up, they’re making use of some Intel ultra-low voltage chips, and it’s supposed to be small enough to “slip easily into a large pocket”, a real large pocket.

The QWERTY keyboard unit is said to be two years away, so we’ll just have to settle on staring at pictures for now. No firm launch date or pricing have been set, though they are reporting that Microsoft will be keeping Origami minitablets “under $1,000.”