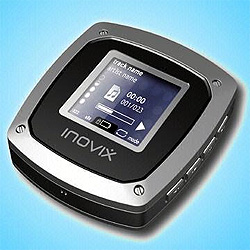 There are a lot of iPod enthusiasts out there who just can’t get enough of Apple’s glossy white goodness, but there are also just as many anti-Steve Jobs people out there, who will buy anything before they turn to an electronics product with a lower case “i” prefixing its name. Obviously falling into that second category, the Key Ware HS1013 is a 75.5 gram digital audio player, sporting a simple 128 x 64 pixel, 2-color OLED display.

Unlike other MP3 players its size (72.8 x 63.4 x 24.4mm), they’ve opted for a micro-HDD instead of flash memory. In this way, they’ve managed to shove 2.2 or 4GB worth of storage in there – not a lot, but more than most flash-based players out there. Of course, it connects your PC via USB 2.0 – I’d be surprised to find a new MP3 player these days that still only does the 1.1 thing – and will play most formats, including WMA and ADPCM. Other features include voice recording, line-in, and an FM tuner.

No word on price or availability, but you might not be that interested in the Key Ware HS1013 anyways. On a single charge of the 750mAh lithium-polymer battery, there is only four hours of life to be had.

Ah… another random DAP to fill up the boring moments in life (as far as DAPreview goes). Let’s take Ye Olde Check Liste out on the table.