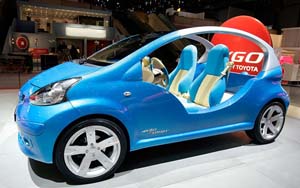 Whither the U.S. auto industry?

With all the focus on hybrids and compacts and auto efficiency these days, the big dogs at the U.S. Big Three have found themselves outclassed again. The explosion in desire for gas-hogging SUVs has collapsed, and the American auto manufacturers are still trying to catch up.

Every announcement from Japan, China, and Germany of new technology and new batteries and new styles at auto shows seems to be accompanied by announcements from Ford and GM and Chrysler (itself now owned by a German consortium) of layoffs and dwindling market share.

One study found that together, Ford, GM, and Chrysler lost 3.7 cents for every dollar of auto sales in 2005. GM, in particular, had 42 percent of the market in 1985. Twenty years later, that share was down to 26 percent.

One way that American automakers are trying to regain momentum is introducing more new models. Analysts agree that more models means more buzz and more interest and, usually, more sales. But with the flood of new models being introduced from Asian and European competitors, American automakers run the risk of being compared to the competition all over again—and found wanting.

One problem seems to be image: Asian automakers, particularly those in Japan, are known for making efficient vehicles that might be smaller than their American counterparts but also promise their operators lower costs at the gas pump, a tradeoff a great many drivers are willing to make for slightly more vulnerability in accidents. European automakers, on the other hand, are known for efficiency (Germany) or for flamboyance (Italy).

And what are American cars known for? Being big and bulky and able to hold everything you need for a four-day weekend but also guzzling more gas than you want to pay for on that four-day weekend.

Some progress is being made, although you might be hard-pressed to find it by scratching the surface. But look behind the headlines and you’ll see some of the leaders of the American auto industry embracing hybrid technology, natural vehicle coolants, and better fuel efficiency. Some excellent examples exist, such as the FordÐGM joint venture in California’s Bay Area, which could provide a model for other U.S. automakers.

But that’s nuts and bolts, making cars and trucks more efficiently and avoiding layoffs and bad news. The main problem, it seems to most industry analysts, is that of image. The average American vehicle consumer just doesn’t have the loyalty to “buying at home” that he or she used to have. More and more, it’s all about how much it costs to operate that vehicle and how cool it is. Given the choice between a Prius and a Corolla, most Americans would choose a Prius, especially because of its hybrid capability. And given the choice between a Hummer and a Lamborghini, most Americans, assuming that they could afford it, would choose the Lamoborghini. On the cool scale, Hummer can’t carry a tune.