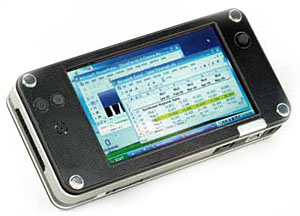 This Portable PC from DualCor packs a pair of processors, but it’s not exactly Core Duo technology, and neither is its price. You’ll get a 1.5 GHz laptop chip to run Windows, in addition to a 400 MHz mobile processor. To conserve battery life, the Portable PC only makes use of one processor at a time.

Despite its small stature, this device comes feature packed. The touchscreen display is an adequate 800 x 480 pixels, but if you want to make use of a bigger screen, the VGA port makes it easy. Other notable highlights include a pointer stick and 3 USB ports.

Not a heck of a lot else is known about the DualCor Portable PC, but it seems to want to fit into a niche market right in between the ultra-portable Blackberry and the more powerful notebook computers. And with a price of a mere $1500 for this DualCor unit, that Origami project we’ve been hearing about might have to rework a few kinks.