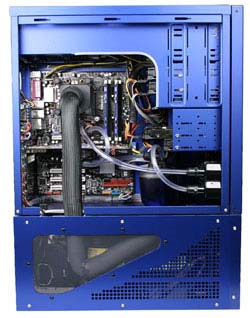 We’ve come to expect surprises and leaps of faith at technology conferences. CeBIT will likely be no different. And yet, one PC that is supposed to be unveiled at this year’s conference has tongues wagging. It’s a joint venture between Asetek, Kingston Technology Europe, and Western Digital; and the magic number is 5.46. That’s the number of gigahertz at which the machine purportedly runs.

You’ll remember that the top number now is 3.8 Ghz, boasted by Intel’s Pentium 4. But the fascinating merger—on this project, at least—of these three companies has created a monster. Asetek lent its phase-change coolers. Kingston lent its HyperX DDR2 RAM. Western Digital lent its Raptop X drives. The result is a bullet train in the realm of diesel.

The light-speed “Dream Machine” will be available for gawking at the Asetek booth at CeBIT, which begins March 9 in Hannover, Germany.