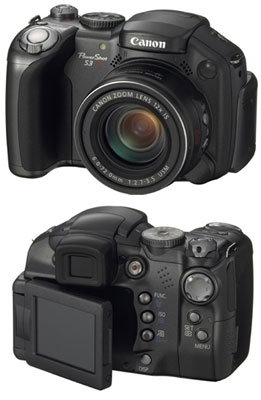 Having a whole lot of zooming power is fine and dandy if you have a tripod to keep the camera out of your shaky hands and onto something a little more stable. The last thing you want is a blurry captured memory, so that’s why the Canon Powershot S3 IS comes with a 12x stabilized zoom lens. The IS stands for image stabilization, based on the company’s lens-shift technology.

Although its appearance may make you think that the 6 megapixel S3 is meant for the prosumer, it seems that Canon is selling it as a “family” camera, designed for soccer moms to take snapshot at their kids’ games. Maybe they’re just trying to get the best of both worlds, because there are plenty of features for the more advanced photographer, while at the same time staying simple enough to be a point-and-shooter.

Look for the Canon Powershot S3 IS this May, priced in the neighbourhood of $500.