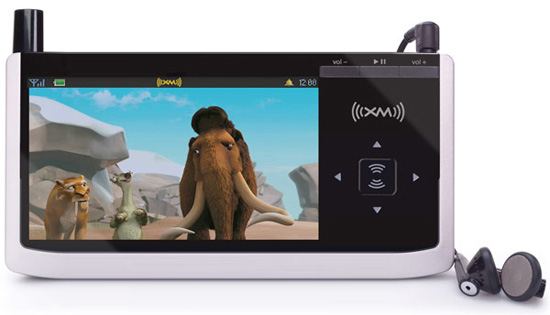 Sirius and XM are engaged in a heated battle for satellite radio supremacy, but it seems that the latter might be adding video to its portably-available portfolio. Like most other rumors on the internet, this is far from being confirmed, but Bear Sterns analyst Robert Peck has recently revealed that XM demonstrated a “wearable video device” to analyst, providing some credence to the claim that we might be seeing XM Satellite Video some time soon.

No need to download movies onto your iPod Video, or load them up on your favorite PMP, because the XM device will make use of On2 VP7 video technology, which can compress the content to a more broadcast-friendly size. What this means is that it is capable of receiving live video signals in portable mode, with up to twenty broadcasted channels, each with 256kb of capacity.

Whether the picture provided is the real deal or not has yet to be determined, but it does bear a striking resemblance to the Samsung Helix.

The way things are sounding, we might be seeing an XM video device before the holiday season, but of course, in the world of technology, you can never know for sure.