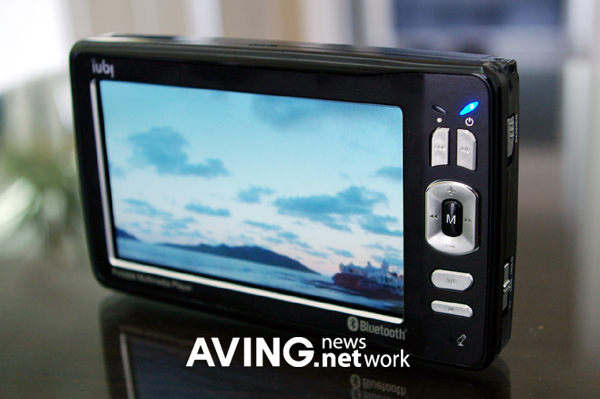 I don’t know about you, but for me, with so many personal media players coming out these days, it’s starting to take quite a bit before the product can wow me. The new “iubi blue” from Elentec doesn’t quite hit that threshold, but I do like that it has Bluetooth support. Considering that this device is designed for movie viewing, I certainly hope that the Bluetooth is of the A2DP stereo sound variety, but we don’t know for sure.

The widescreen 4.3-inch display is a good size, because any bigger and it may start to border on it being truly portable – after all, as it stands now, the iubi blue is a mere 19mm thick and 260 grams heavy. Battery life is adequate with 8 hours of video playback, or 15 hours of music. No word on storage capacity, but there is an optional T-DMB receiver, including the ability to record TV programming. Ten languages – including Japanese, Chinese, and English – are supported.

More information about Elentec’s new PMP, like pricing and launch dates, will likely become available when CeBIT 2006 opens its doors later this week in Hanover, Germany.