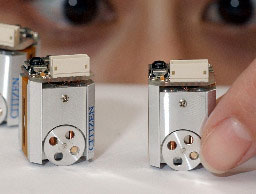 Several companies are at work trying to make better and better robots. Citizen hasn’t been one of them up to now, but they have unveiled the Eco-Be, a miniature two wheeled robot that is driven by a watch motor from the Citizen line of watches. A watch battery powers it, since it requires a very low amount of power to operate.

It is tiny – just 1.8 cm wide and 2.5 cm tall and looks more than a little like a Zippo lighter on wheels. It is controlled by infrared remote control. In a demonstration, the robot was shown to move forwards or backwards and turn smoothly. The Eco-Be will be appearing at RoboCup 2006 in Germany in June.

As with most robots, the question is what is it good for? Not much at this point, really. Citizen hopes that the robot will help researchers develop even smaller and lighter weight robots. The company is working with researchers at Osaka University to improve the performance of the robot.