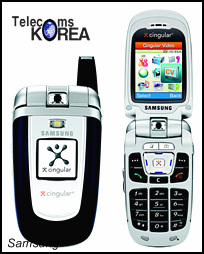 America’s largest GSM service provider has teamed up with Korea’s largest cell phone manufacturer to bring WCDMA to North America. Samsung Electronics announced yesterday that it will begin supplying its GH-ZX10 clamshell to Cingular Wireless, as the GSM operator prepares to ramp up the first commercial WCDMA service in North America.

WCDMA has already enjoyed some worldwide success, including fairly significant penetration into Europe last year. As such, Samsung hopes that by striking the pan while it’s hot, it can capture an even bigger share in the North American market. Down the road, the Korean handset maker also hopes to introduce HSDPA to North America.

Other than its obvious WCDMA appeal, the Samsung GH-ZX10 is still one feature-packed mobile. The swivelling 1.3 megapixel shooter can also do video – in fact, this handset is capable of real-time video telephony. Having a built-in MP3 player can’t hurt either. And because it’s a quad-band GSM, you can be sure you’ll receive excellent coverage. No word on official launch date or pricing.