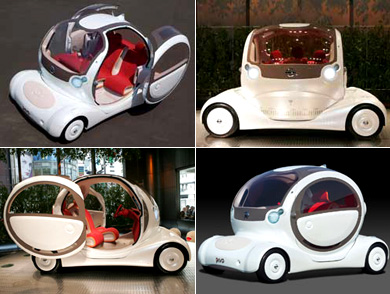 Sure, concept cars with rear suicide doors and vans that double as mobile lounges are a dime a dozen, but the Nissan Pivo is something different altogether. The entire cockpit can spin 360 degrees, allowing the Pivo to be “driven straight into a parking slot and, once the body has been swivelled around to face the opposite direction, driven straight out again,” said a spokesperson for the company at the Geneva Motor Show.

Another big trend in the auto world is the ditching of conventional two- and four-seater designs, opting for innovative three-seater models. The Pivo puts the driver in the front, and “two dizzy passengers behind.” Not only that, but this car is full-electric, powered by a single lithium-ion battery.

This tiny 2.7 metre long, 1.6 metre wide vehicle has a unique egg-like shape, and sports a pair of electric sliding doors, in addition to numerous cameras mounted to its outer pillars. These result in “virtual windows” that, when used with the cameras at either end of the car, can provide a live video feed to an “Around View” 360-degree image.

They’re not saying how fast, how much, when, or where, so clearly the Pivo is still in its development stages.