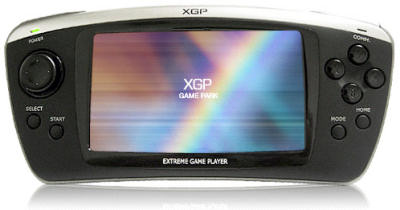 So many people may be sporting a Sony PSP or Nintendo DS, but that didn’t stop Gamepark from developing a cult-like following with its open-source GP2X handheld. Well, it seems that the company is releasing the next generation of portable gaming machines with the PSP-like XGP and the Game Boy Micro-like XGP Mini.

We’re hoping that both of these units will still sport the same PMP and emulation functionality as their predecessor, but the design is a clear departure. The XGP, or Extreme Game Player, abandons the Sidekick-esque look for simpler Sega Game Gear-like form factor. The screen is bigger than before, with 4-inches of full color TFT LCD goodness. You’ll get a built-in DMB TV receiver, and Wi-Fi connectivity, as well as an SD expansion slot, and 64MB each of RAM and NAND Flash. Estimated price is about $300.

The XGP Mini, however, is probably what will catch your eye. The design was clearly influenced by Nintendo’s Game Boy Micro, packing in lots of gaming into a tiny package. Function and feature-wise, the Mini is essentially a toned-down version of its bigger brother. It only contains 32MB of RAM, there is no mention of mobile TV or WiFi, but there will be an SD expansion slot to go with the minute 2.2-inch display. Pricing should be in the $150 range.