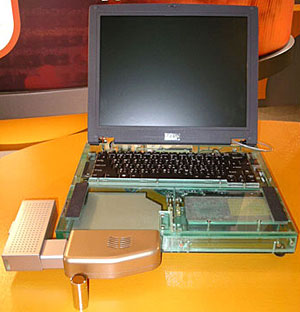 We’ve already heard news for some time now from technology giants like NEC and Toshiba about shoving fuel cells into notebook computers, but they have never come to pass. One of the main problems facing this technology is the whole thing about bringing combustable fuels on board an airplane. So many companies have never made it past the idea or prototype stage of development.

Antig Technology and AVC Corporation will show their production-ready fuel-cell unit for notebooks next week at CeBit. It seems like we’re finally getting closer to extending our laptop battery lives. The Taiwanese companies are saying that the fuel cell is about the size of a CD-ROM, and will replace the media bay to provide up to eight hours of extra power.

You might be finding these fuel cells in HP or Dell notebooks by the end of the year, because AVC already has contracts set up with unnamed Taiwan ODMs who actually produce the notebook computers for a number of large name brands. They say they are set to be ready for production by the second half of this year.