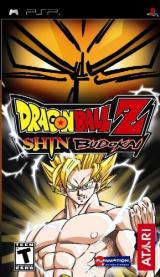 The Dragon Ball franchise has a long history, with the anime series being watched by just about every Japanese child through the late 80s, as well as more recently being translated and penetrating into the American market. The video games that have accompanied Goku and his buddies, well, there’s been a mix of the good and the bad, but there have certainly been a lot of titles available for all your Vegeta, King Kai, and Piccolo junkies.

The latest is Dragon Ball Z: Shin Budokai for the Sony PlayStation Portable. Sure, side-scrolling action adventures may be fun, but fighting games are the natural arena for the DBZ universe. The cel-shaded appearance of the game gives a nice “cartoony” feel to the game, and is immediately reminiscent of the DBZ fighting games – the Budokai series – available for the PS2.

In addition the regular fare, Shin Budokai also comes wireless-ready. The story, which is from the upcoming Fusion Reborn movie, is told through static cutscenes and speech bubbles. Unfortunately, in the story mode, you will not be able to stick with one selected character. You are forced to follow the stories of Gohan, Teen Gohan, Gotenks, Android #18 and others, in accordance to what the narrative requires. If you want to choose your warrior, you may be more inclined for the basic Arcade mode.

IGN is reporting an American launch date of March 7, 2006.