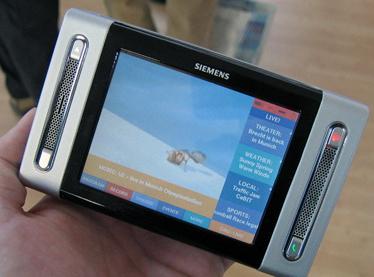 Hannover, Germany is playing host to next week’s much anticipated CeBit 2006 show, and it is there that BenQ Mobile will be demonstrating some nifty DVB-H handsets that the company developed in tandem with Fraunhofer Institute for Integrated Circuits IIS.

With BenQ’s recent partnership with Siemens, the company gained access to previous models and prototypes developed by the latter, and this DVB-H gadget is no different. Siemens unveiled a prototype last year that did the DVB-H thing, but this time it seems the software will come from Fraunhofer IIS.

Based on last year’s prototype, we should be expecting a VGA-resolution screen, dual stereo speakers, and an almost button-less design. Moreover, videos can be run either full screen, or in a window to allow for multi-tasking. Memory seems to be 128MB built-in, with room for expansion via MMC (though that will likely change).

“BenQ Mobile invests in DVB-H enabling technology to prepare a commercial mass market in 2007,” comments Clemens Joos, BenQ Mobile CEO. “The integration of the personal video recording functionality will bring maximum experience to our customers and bridge the gap until the DVB-H coverage is completed.”