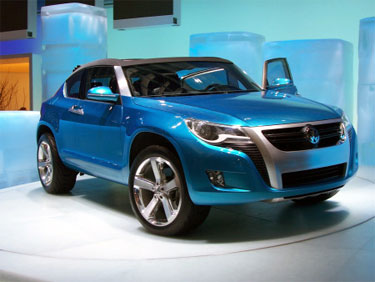 Last year Volkswagen turned heads when they unveiled their Twincharger, which kicked up a 1.4L 4-cylinder engine into something people would want by adding turbo and a supercharger. This year at Geneva, they are showing off a concept car that takes that idea a step further.

Their Concept A SUV has the same Twincharger, except it runs on compressed natural gas. The engine uses 5 kg of natural gas per 100 km and kicks off a respectable 150 horsepower. They say that the car is capable of more than 200 km/h. Emissions are only 20-30% less than the gas fueled TSI, so don’t go all thinking you are saving the planet with this one.

Though they call it an SUV, at first glance the car looks more like a coupe. With its sleek lines and 20 inch rims, Volkswagen is showing us where all-terrain vehicles are headed. If you like nice tricks in your body work, the nicest touch is the rear suicide doors. It also has a pickup-style tailgate along with a rear hatch to easily load it up with all your stuff.