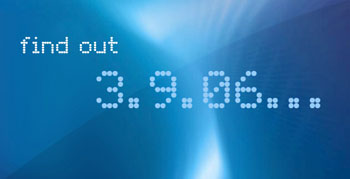 There was a good deal of confusion caused among tech watchers by the Origami Project website and the timing of the Origami announcement by Microsoft. If you haven’t been following it, Origami is the ultra-mobile PC project that has rapidly gone from rumor to announcement. The company launched a website-based viral marketing campaign that mysteriously teased us with information. There was a three week timeline on the bottom of the page and the promise that we could learn more on March 2. People erroneously interpreted that as meaning March 2 would be the release date. Instead, today we got another teaser about how we could use Origami wherever we happen to be. The actual announcement will take place on March 9, which is a logical day since it is the first day of the CeBIT show in Hanover.

The effectiveness of the website campaign was lessened somewhat when a video of the Origami in an early development phase was leaked on Monday. Microsoft went into full spin mode, killing a bit of the surprise, but building up anticipation for the product.