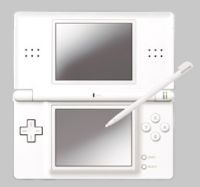 The Nintendo DS Lite went on sale in Japan today, but don’t jump on a plane to go grab yourself one just yet. They are sold out already. There were lines out in front of several electronics stores before they opened. Some of the people who waited were disappointed because the supply was limited. It’s not going to get any better any time soon, either. Nintendo will only be able to make 450,000 of the shrunken devices in March. Production problems also mean that the device will only be available in white for a while anyway.

Given the huge response in Japan and the production problems, one can only imagine that it will be quite a while until the DS Lite is released in Europe or North America. Frankly, I would rather wait for a while until they get production up to speed, rather than have a ridiculous frenzy for a few here and there as they show up. If you can’t wait until the fall, you can always head to eBay. I’m sure some enterprising Japanese folks are ready and willing to gouge you. Let the bidding wars begin.