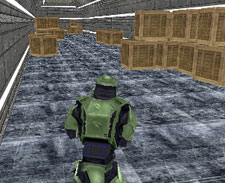 Well, not exactly. Of course Microsoft wouldn’t give up its flagship Xbox franchise over to the despised Sony, but that didn’t prevent a homebrewer from dreaming up a version of Halo to be played on the PlayStation Portable (PSP). Going by the username of PSPdemon, this enthusiastic gamer took the popular multiplayer app Iris and shoved in everyone’s favourite alien killer in a green suit.

Based on the screenshot, it doesn’t look particularly interesting. There are crates. Crates as far as the eye can see. Crates that can contain health packs, ammo, new weaponry, and maybe even the fountain of youth, who knows. What we do know is that this version of Halo is a relatively simple four-player deathmatch with Master Chief as the primary character.

Oh, the beauties of the internet. Only on the internet will you be able to find fighting games that contain both Mortal Kombat and Street Fighter characters, extensions of the Mario franchise where he meets up with Sonic, and now, Halo on a Sony console… sort of.