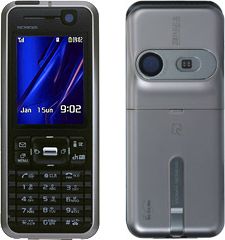 Sony Ericsson may have just announced their Cyber-shot multi-megapixel camera phone, but now the people of Japan can get their hands on a 3.2MP handset of their own. NTT DoCoMo announced last October that they would start carrying the FOMA SO902i, a 3G mobile phone that comes equipped with not one, but two cameras, and now they are actually going to offer it.

The first, mounted on the front, is only capable of an abysmal 0.1 megapixels, which I suppose is enough for it video telephony purposes. However, the second, placed on the back, takes incredibly vivid pictures in all their 3.2-megapixel glory. The other features aren’t anything jaw-dropping, with a 1.9-inch QVGA display, Memory Stick Duo expansion slot, and a reported 140 minutes of talk time.

If you happen to be in the land of the rising sun, and are looking for a multi-megapixel shooter shoved into a sleekly designed candybar handset, the FOMA SO902i will become available through NTT DoCoMo starting March 10th.