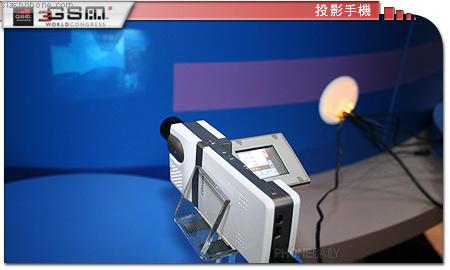 Clearly this particular product is still in the prototype stages, so you probably won’t be seeing this on the market anytime soon. That said, this is the world of mobile phones where innovations arise at every corner. Word is that there is a new cell phone – codenamed GPP2 – that can double as a portable mini projector.

It is a tad larger than a conventional (by today’s standards) mobile handset, but it is certainly smaller than a lot of portable projector’s out there. To control the projector functions, there is a swivelling LCD touch screen which lets you access the menu. To answer a phone call, apparently you can use “the buttons at the bottom”, and to navigate the menu, there is a d-pad on hand.

Obviously, you can’t expect too big or too bright a picture out of this thing – after all, it’s still just a phone – but they say you get a 15” projection from the GPP2. To increase lumens, it will probably require some external power source. Why anyone even needs a projector on their phone is beyond me, if you really need a projector then you should be carrying that seperate.