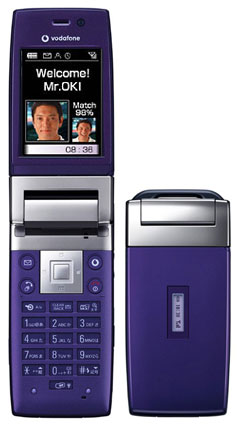 Vodafone K.K. subscribers in Japan will get to have their faces for passwords, the software can be credited to Oki Electric Industry’s face sensing technology.

Oki’s Face Sensing Engine (FSE) will replace the current password system or feature in Vodafone K.K. units. Instead of keying in a password, the user will instead have to submit to a facial scan in order to use the unit.

The sensor will be integrated in the Vodafone 904SH mobile phone which is slated to be released in April. Succeeding 3G mobile phones of Vodafone K.K. will also have the FSE as a standard feature.

The new password system is more convenient as the user does not need to memorize and key in alphanumeric characters to activate the phone anymore. Password recognition and processing is also faster since Oki boasts that its FSE has the fastest verification rate compared to other similar devices or technology.

Oki also guarantees that the sensors would be able to conduct reliable scans regardless of the lighting condition. It also assures accurate readings despite changes in facial features that are brought about by different facial expression.

The integration of the FSE into the mobile units will not result to a significant increase in handset price as Oki said that the technology costs little. It would also not entail any inconvenience or require extra equipment as it is embedded in the mobile phone. And besides, how can you lose your face?