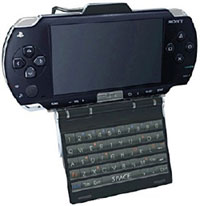 The PlayStation Portable (PSP) has always been marketed as more than a “simple” mobile gaming machine. It was designed to show movies, play music, and a wide range of other multimedia functions. There’s even a hack floating around the internet that allows you to hop onto the internet through the PSP, check your email and read MobileMag, but without a keyboard, surfing the web is a bit of a challenge to say the least.

That’s why when we heard about the Logic 3 keyboard for the PSP last year, everyone got pretty stoked, but wondered if it would ever make it to production. Unfortunately, the company has just announced that they canned the project, placing the blame squarely on Sony for not providing enough information for the keyboard to actually work. This will certainly prove interesting if Sony releases a PSP keyboard of its own a little further down the road.

Some have even rumoured a Sony-made PSP keyboard being released in a few months time, which could answer why Sony refused to give Logic 3 enough support. Or maybe Logic 3 is full of it, who knows. In either case, the PSP remains keyboard-less, so for the time being, you’ll be reduced to surfing the web in a not-so-efficient manner.