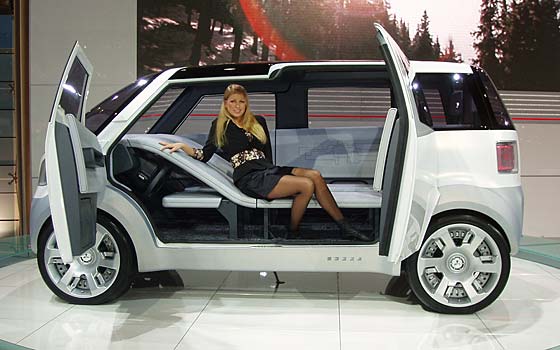 News from the Geneva Motor Show is coming fast and furious, and of course we’re getting swamped with a wide array of concept vehicles that will likely never make it to production. Here’s one that I don’t foresee hitting roads any time soon. Mitsubishi has taken the old school Volkswagen camper van, shrunk it down a bit, thrown in some electric motors, and called it the Concept-EZ.

Based on the picture, this vehicle isn’t huge, but it has plenty of space for some mobile lounging goodness. The interior, when under normal use, will have your regular seats and whatnot, but they can easily be converted to a bed-like surface for when you want to take your lady friend to, er, somewhere private.

Most interestingly is that it seems that the Mitsubishi Concept-EZ is full electric. In fact, there is an electric motor for each wheel, each said to produce 27hp. What this means is that the combined power is a mere 108hp – not a lot, but a decent achievement for a car that combusts, well, nothing.