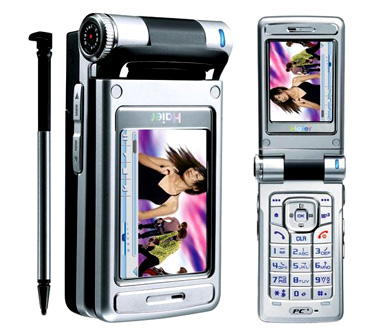 Haier may not be the biggest cell phone maker in the world, but they are certainly a company that puts out some interesting – and functional – units. Their latest is the Haier N60 Smartphone, one of the few PDA phones on the market that is powered by Linux. The swivelling 262k 240×320 touchscreen will immediately catch your eye, as will the 1.3 megapixel digital camera.

This tri-band GSM handset comes with a 400 MHz processor, as well as 59MB of on-board memory. Expansion comes in the way of a SDIO slot, meaning that although this phone doesn’t come with Wi-Fi built-in, it can be easily added. Battery life from the 900 mAh lithium-ion is said to be 180 minutes of talk time or up to 200 hours of standby.

It’ll handle all the usual multimedia, including playing MP3s, as well as playing and recording MPEG videos. Although, the N60 will do GPRS, Infrared, and WAP, Bluetooth appears to be missing. We’re still waiting on Haier to announce pricing and availability.