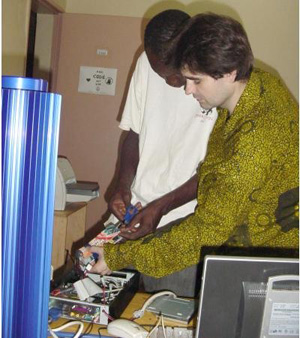 The Internet has come to rural Mali—sort of.

Workers for an American nonprofit organization called Geekcorps are currently stationed in the West African nation, helping the residents communicate via email. And they are doing it through a melding of old and new technologies.

Specifically, a large village in one part of the country might have one Internet connection. Members of Geekcorps maintain this connection and send and receive email to other Geekcorps stations throughout the country. The final step—and the one that is absolutely necessary because 70 percent of the native population cannot read—is to use the spoken word.

The PCs are old but dust-resistant, the broadcasting equipment is second-rate but sturdy, and the people who do the typing and broadcasting are volunteering their time for a few months. Geekcorps pays travel and housing expenses and allows family members to come along. The result is people who want to help and who don’t dread their assignments. They also put their creativity to work by using existing materials (including water bottles) to build Internet receptors.

How does it work? Quite simply, actually.

The radio stations do other broadcasts and run advertisements, which is how they make money. They also get funding from international sources, which enables them to keep up and running. And it’s not just Mail. Similar operations are now running in Ghana, Zamba, Kenya, and South Africa.

Think of it as a PC Peace Corps.