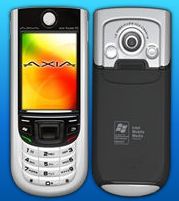 The HTC Tornado Smartphone might be just a touch smaller than the 0.8×1.9×4.5-inch AXIA A308 PDA phone, but that didn’t stop the Malaysian manufacturer from marketing its product as the “world’s smallest PDA Phone on Microsoft Windows Mobile 5 featuring Wifi connectivity.”

The design leaves much to be desired – it isn’t exactly the most creative thing in the world – and it is lacking a functional QWERTY keyboard, but I guess that’s the price you pay to be the “world’s smallest.” Despite its diminutive stature, the AXIA A308 still manages to pack in the goodies. High speed data transfer is easily addressed with Wi-Fi, Bluetooth, GSM/GPRS, IrDA, and EDGE compatibility, and the 416MHz Intel CPU is quite nice as well. Other features include an integrated 1.3 megapixel camera, 2.2-inch TFT LCD touchscreen, and miniSD expansion.

As of yet, no exact pricing or launch information has been made available, but more deets should surface when AXIA makes a more official showing at this month’s CeBit show.