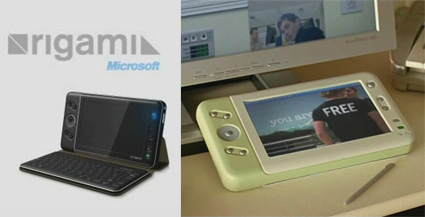 For once, the biggest rumor floating around isn’t about Apple. Even though Apple has an announcement coming up, it is Microsoft that is getting most of the attention. We reported the news of a possible ultramobile PC a couple of weeks ago. Since then a mysterious Origami Project website appeared promising that we would learn more about something on March 2, which is this Thursday. Turns out that that attempt at viral marketing is a Microsoft website.

This past weekend, comments came out that Origami represents a device and a video surfaced and then disappeared that showed a wireless handheld device with a touchscreen and a fold-out keyboard. Microsoft had to respond to the videos. They called them an early prototype of Origami that is about a year old.

Before you get too excited, though, the word is out that the big announcement on Thursday will reveal a new technology instead of a new product ready to be shipped like Apple does with their announcements. If Origami is the ultramobile PC that people have been waiting for then they may just have to wait a while longer. At least, though, they will have a better idea of what they are waiting for.