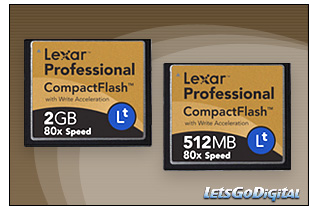 An industry leader in NAND flash-based memory, Lexar Media is set to release a line of memory cards that will come with a unique LockTight system, designed specifically for “security-conscious photographers worldwide.”

Showcased at this week’s PMA show, it seems like these Compact Flash and Secure Digital cards will only work in compatible computers and digital cameras, because they will not be able to read or write data to a “locked” card until “a critical authorized authentication process takes place between the LockTight card and the host computer or host camera.” Those statements are a little cryptic, but according to David Spraggs of Police Magazine, “The locking and unlocking feature is easily understood.”

It seems like the company is particularly targeting the LockTight system at professionals involved in forensic photography, scientific research, military, law enforcement, and mass media. That way, evidence cannot be compromised or tampered with. Look for capacities of 512MB and 2GB, in a variety of languages including French, German, Spanish, and Japanese. Write speeds can get up to 120X.