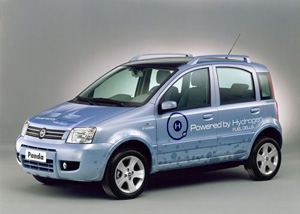 The Geneva Auto Show, which begins this week, will feature dual focuses on style and affordability, industry experts say.

Fuel efficiency will be the name of the game for many automakers, painfully aware that concerns over the increasing fragility of the environment and continually high price of gasoline might keep consumers from buying high-flying, gas-guzzling models. Diesel and hybrid will be popular buzzwords.

“All the manufacturers are under pressure to demonstrate their commitment to the environment,” said Stephen B. Cheetham, European auto analyst for Sanford C. Bernstein Ltd. in London. “The whole hybrid issue has gained momentum in the last 18 months.”

Nearly every major manufacturer will showcase a new-technology vehicle, with the emphasis on hybrids. In particular, look for Fiat of Italy to sport the Panda CNG, which runs on compressed natural gas. France’s PSA Peugeot Citroen also plans to show off the Ce Gaz Naturel, the name of which describes its fuel choice.

Among the more than 140 new models expected to be unveiled are a large number of supercompacts, popular again as the pendulum swings back from gashog SUVs to more affordable cars. According to one study, the number of subcompacts has risen by nearly 2 million worldwide in the past two years.

But it isn’t all small cars and natural gas. Style and horsepower will rule the roost as well. Look for Lamborghini to take the wraps off the sleek Mercielago LP650, a 640hp beauty that will sell for US$360,000, and for Porsche to showcase yet another elegant yet powerful 911, the GT3 that will sell for a modest US$106,000.

Other familiar luxury vehicle names will be there, including Jaguar, Mercedes-Benz, Lexus, and all the rest.

It’s innovation, style, substance, savings, environmental awareness, and affordability. And it all starts Thursday in Switzerland’s most familiar city.