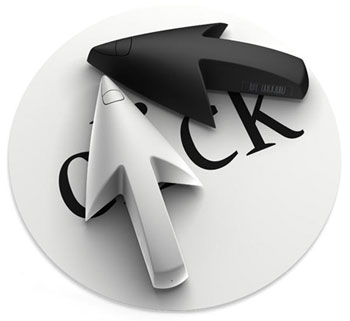 Giving new meaning to the term “point and click,” Art Lebedev Studios have come out with the ultimate in devices whose names describe their functions. This is the Mus2, and it is a computer mouse in the shape of, yes, an arrow.

Now comes the Mus2, which is wireless and battery-powered, comes in black and white and is as easy to maneuver as the more familiarly shaped mice. The button is at the top of the arrow, and the entire thing is no larger than a standard mouse.

Industry analysts who have tested the Mus2 say that it is easy to handle and comfortable in the hand, no doubt to its curved arrow points and centrally located mouse button (which, by the way, is two buttons, which are vertically separated).